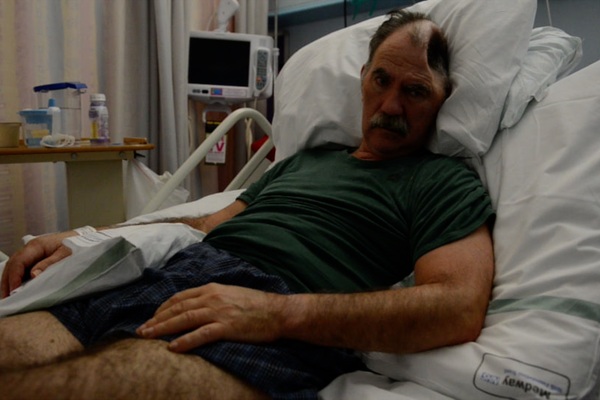 What happens after a catastrophic stroke?

This film, which first appeared on BBC Horizon, shows in extraordinary detail the rarely seen journey back to recovery. Fly-on-the-wall footage recorded by his wife Fiona a filmmaker, over four years, shows in gritty detail the hard graft of  Richard Gray's recovery. Initially bed bound unable to do anything, Fiona tells us that the outlook for him is bleak.  Yet occasionally we see small glimmers of hope. We witness the moment his fingers move for the first time and then over months watch him struggle to relearn how to walk again. In archive footage we see and hear him at his professional best, when he was a peacekeeper with the United Nations immersed in the brutal war in Sarajevo, Bosnia. We also hear from surgeons and clinicians who were integral to his recovery, from describing life-saving surgery, high-risk reconstructive surgery, to intensive rehabilitation programmes that push Richard to his limits.

Fiona narrates the film and includes excerpts from her diary describing with raw emotion how she felt as she saw her husband, once a rugged soldier decimated by the stroke. As the film starts she asks “will Richard, my Richard still be there?” By the end the answer is clear.

The film was followed by a 40-minute panel discussion moderated by Diane Playford, Professor of Neurological Rehabilitation, Warwick Medical School. Diane's interests include rehabilitation processes and outcomes including goal setting, and vocational rehabilitation. She is also Research Director at the Royal Hospital for Neurodisability where she has established a Brain Injury Research Group undertaking research into people with profound disability.

Our panel members were:

Catherine Doogan, clinical psychologist who has been working in field of neuro-rehabilitation for the last ten years. She has a specialist interest in generating novel therapeutic approaches to help people with cognitive impairments caused by  stroke or Dementia. Through her NIHR funded post-doc work at UCL, she has co-created two digitial neuro-interventions; one for people with post-stroke aphasia, and one for people with proper-name anomia and dementia. She is also working on an immersive virtual reality stimulation paradigm for people with acute, post-stroke neglect. A particular interest is how patients and carers experience being involved in co-design and the variety of expectations and experiences they have of participating in neurorehabilitation-based research.

As a result of COVID-19 Catherine was asked to develop an group on-line neurorehabilitation service in Queen Square called N-ROL (Neuro-rehabilitation on-line). In her clinical work she has developed interventions around identity change after brain injury and the sometimes overlooked role of the carer.

Fiona Lloyd-Davies, film-maker and Richard Gray's wife. Fiona has been making films and taking pictures in areas of conflict and hostile environments since starting her career in Bosnia during the war. She has worked for the BBC, Channel 4, Al Jazeera and many others in a career that has spanned over 25 years.

Liz Williamson, speech and language therapist with specialist skills in the communication and swallowing difficulties which arise from neurological impairment. She obtained a Bachelor of Speech Therapy at The University of Queensland, Australia in 1991 and has worked in the field of acquired speech, swallowing and communication impairments for 29 years.

A limited number of tickets are available: book now to join us on Sunday 12 July; we will close registration at 4pm on Sunday 12 July and will send you a link to the event by 6pm, an hour before the screening starts.