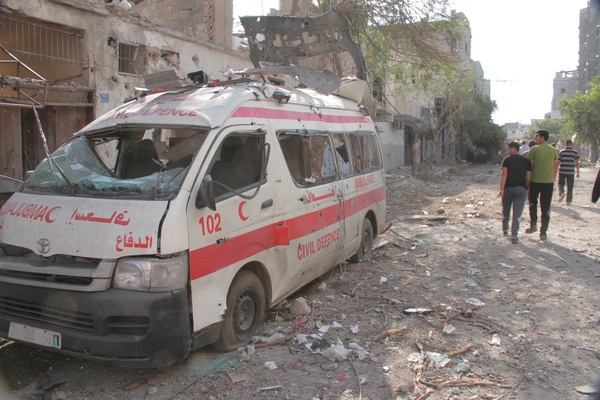 Ambulance is a raw, first-person account of the Israeli offensive on Gaza in July and August 2014.

Mohamed Jabaly, a young man from Gaza City joins an ambulance crew as the war approaches. What is it like to live under constant threat? How can Mohamed find his place in a country under siege, where there seems to be no foreseeable future?

We experience the war through Mohamed’s eyes, watching directly from the ambulance passenger seat, as he comes of age among dead bodies, terrified families, and the constant risk of sudden death.

In response to the dark chaos of war, Mohamed learns to rely on his captain and crew-mates from the ambulance, who in turn support him to make a film that expresses both the trauma and hope of the too-often invisible citizens of Gaza.

We were delighted to have Mohamed with us for the panel discussion, along with Dr Mahmoud Mattar, orthopaedic surgeon at Al-Shifa Hospital in Gaza. The discussion was moderated by Aimee Shalan, CEO Medical Aid for Palestinians. Here's the replay: