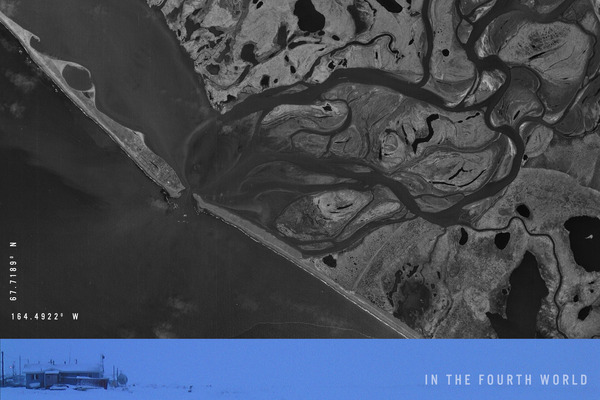 In the Fourth World

The tiny and remote Inupiaq village of Kivalina, Alaska is crowded into the southern tip of an extremely narrow barrier reef island above the Arctic Circle.

When you stand on the village’s only road – a gravel path that leads from the airstrip to the southern tip of the island - you can see the shores of Kivalina lagoon to the east and the Chukchi Sea to the west just by turning your head. The eroding edges of this narrow spit of land, the poverty, overcrowding and decay in the village, sit in profound contrast with the vast and spectacular landscape beyond.

Interactive documentary, In the Fourth World, documents the social, economic and environmental challenges that confront this village, where indigenous people live below the poverty line, without running water or toilets, adequate health care, quality education or access to employment.

Kivalina is in crisis – a crisis produced by multiple forces, histories and circumstances spanning many years. Its causal factors cut across many fields of discourse – scientific, legal, cultural, racial, religious, and political. It is not one story, but a complex of many narratives told by the people of the native village of Kivalina.

In the Fourth World weaves these stories together to document; the extreme environmental degradation caused by climate change and pollutants from the Red Dog zinc mine; the loss of sovereignty, land and tradition through mechanisms of colonial oppression; and the racial injustices and economic inequalities that Kivalina residents face today.

US-based digital media artist Sharon Daniel is attending this year's Global Health Film Festival to present In the Fourth World; her 60-minute keynote will take place on Sunday 09 December at 12.15 in the Henry Wellcome Auditorium and is open to Weekend and Sunday film festival pass-holders.